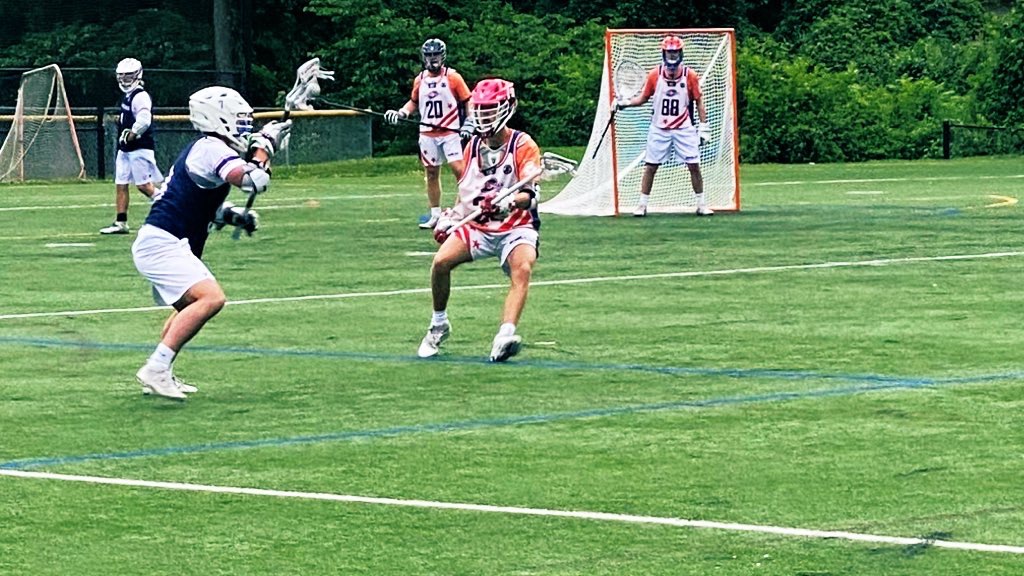 There is so much talent in the DMV area and it was on display this past Monday in McLean, Va.

During the current pandemic crisis, spectators did a good job with social distancing and wore face masks. Their were no college coaches there in-person, they were able to watch the games via Youtube live stream, though.

Their were three impressive games beginning with the 2023 game that started at 3:40p, between the MadLax DC Dogs and Next Level. The DC Dogs have an impressive squad that is ranked #1 in the country by US Club Lax. Both teams had bright spots despite the DC Dogs coming out victorious. The offense is lead by Colin “BBQ” Burns, who is one of the top attackmen in the country in the 2023 class and also fellow Georgetown Prep Hoya, MAC Christmas was impressive at Long-Stick Midfield.

Miles Lancaster, a goalie from DeMatha high school, despite allowing several goals, stood on his head while he was in the game. Lancaster made some amazing on-the-crease- saves. And the Next Level goalie did a nice job leading the defense. Lancaster, who made 9 saves in total, told us he looks up to pro and college guys like Alex Rode (UVA) and Jack Concannon as mentors.

Here are the Top 10 Impressive Players from the 2023 Game

Christmas was named MVP of the Game and we caught up with the Hoyas LSM to get his thoughts on the event. Christmas said the way his DC Dogs teammates played it showed that they have been training and working hard during the three month layoff. But he was looking forward to playing for GPrep this past spring, “Prep lacrosse, I was waiting all year to play it, I love those kids on the team, and I feel like it got taken away from us. Especially the seniors, i’m really sad because they are family and you can’t be with them. But i’m happy to be back out and playing lacrosse again.”

Christmas loves playing on the wing off the face-off, said his mindset this summer is to have “fun spending time with his friends and play some lacrosse.”

The 2022 game only made two and a half quarters before rain and storms entered the area forcing the game to be unfinished.

DC Express 2022 team has been touted as one of the best in the country and on Monday they proved that against MadLax. Jumping out to a 10-2 lead at the half. This team played like they haven’t been off for three months. Very well-coached and fundamentally sound. The offense is lead by Eliot Dubick (Churchill). Dubick is a elusive when bringing the ball from behind cage. Footwork is sharp and the Dubick plays unselfishly. Also on offense is Alec Levy (East Chapel Hill), James Matan (Gonzaga) and Emmett Paradine (The Christ School).

MadLax had some bright spots, Aidan Fairchild (Patriot) was impressive at D/LSM. Also, James Jacob, who plays for Episcopal (Va.) but is from the Dallas, TX area,  played well at Midfield.

It was a different story for the 2021 MadLax team in their game against Next Level LC. Next Level put up an early 4-2 lead. But MadLax would go onto outscore Next Level 9-1.

You could tell in this game both teams weren’t in lacrosse shape and that their was some rust. But the MadLax kids found some momentum off some quick goals to begin the second quarter. McDonogh star Dante Trader and Georgetown Prep’s Zach Whittier were lights out in this game. Whittier and Trader both are destined for University of Maryland. Trader is also a top level recruit in the country for football and will play for Coach Locksley in College Park.

All in all it was a great day for some lacrosse. With the new guidelines in place and the restrictions on travel, most of the club programs are going with this play-date format this summer. After Monday, DC Express 2022’s traveled to Annapolis on Wednesday evening to have a playdate with the Annapolis Hawks 2022 team.